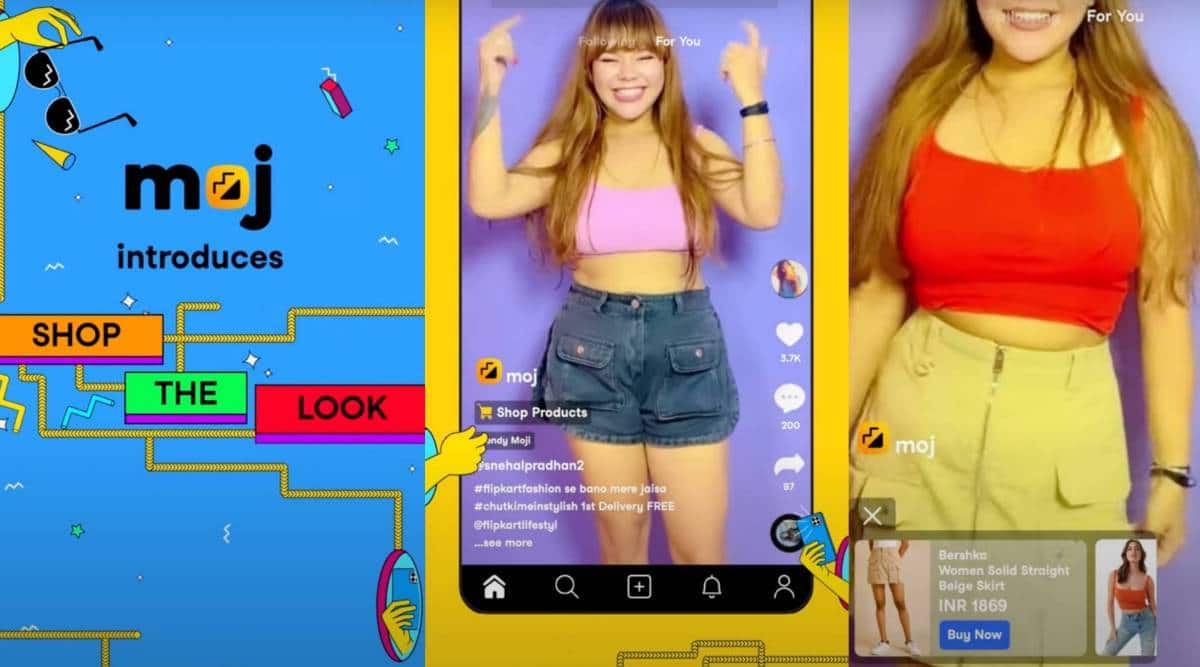 Short video platform Moj is partnering with e-commerce player Flipkart to enable ‘live e-commerce’ on its platform. Moj, which launched in September 2020, nearly two months after TikTok was banned in the market, has seen exponential growth and now has over 160 million monthly active users. It is hoping that the live e-commerce feature will help create a new monetisation model for the platform and its creators.

“We wanted to partner with a player with the widest catalog and for whom the supply side can be managed very well. Also someone with the best logistics because these are things that we don’t have. And that’s why we chose Flipkart,” Manohar Singh Charan, Chief Financial Officer at Mohalla Tech Pvt Ltd, the parent company of Moj, told indianexpress.com. This is a multi-year exclusive deal between the brands.

Sharechat-owned Moj is hoping that like many other short video players in the business, its users will be willing to buy an item when they see an influencer wearing it or even actively promoting it. The live e-commerce feature has currently been tested out by the company and will start rolling out at scale in the next two months or so.

But it is not the only short-video player hoping to capitalise on a model which has proved highly successful in China. Glance’s Roposo already has a live e-commerce feature, while Facebook’s Instagram also has a shopping feature. Moj’s partnership is also inspired by China’s examples, where video apps like Kuaishou have partnered with JD.com and Douyin (TikTok in China) has a similar deal with Alibaba.

“This partnership aims to capture the top of the funnel for e-commerce players. We have a very large audience who’s spending time on the app on a regular basis and average time spent is much larger,” Charan explained. The app plans to capture the ‘impulse buy’ intent among users by showing them a nudge or a notification with a link to a product on Flipkart.

But the continuity of experience will be key as Moj will showcase products to users. How it will work is that one could see a creator wearing a jacket in the video, and the algorithm will then automatically throw up a notification, “saying this jacket is available on Flipkart.” The entire checkout experience will then take place on Moj itself, and won’t require the user to switch apps. On how the tech works to identify products, Charan explained that their algorithms will use reverse image search to match the products in passive cases. He also stressed that a seamless user experience was important. “We don’t want the user to go out from one app to the other because that disrupts their experience,” he added. However, Moj still needs to test the product at scale before rolling it out fully, though pilot-testing for the technology has been completed.

The company is also looking at two models where the notification for live commerce will appear. One would be passive tagging, where a piece of clothing or beauty or tech or any other product would get automatically tagged by the system. The second or more active would be where a creator is specifically paid to create a video to promote a product and the link then appears for the same.

According to Charan, active promotions are very big in China, and the company is hoping they will be able to successfully build those models here as well. Influencers will of course get a share of the revenue from this ‘live commerce’ experience, though it will depend on a number of factors.

“Our biggest reason for pushing this forward is to make sure that our influencer economy starts picking up. For creators, if they are able to generate a livelihood by being a Moj creator, then they will be incentivised to make this as their full time profession and their job,” Charan said.

The company’s aim is that by 2023, they want to generate monetisation opportunities for its creators worth $100 million every year and it is hoping that e-commerce will play a very large role in generating that pool.

For now, Moj has not set a follower threshold in order to decide on whose videos live commerce shopping will pop up. When asked if the passive tags will be enabled on all videos on the platform, Charan said technically they can do this, but they also need to make sure the user experience is not marred. Right now, the company’s own experiments have shown that live commerce is proving to be an engagement enhancer compared to say a banner ad.

“If it holds that scale, we will have no problem tagging shoppable items wherever they are. It also works on personalisation very heavily. If there are users who hate seeing these pop-ups, those guys eventually won’t see it,” Charan explained. But for active commerce cases where Moj could ask a creator to specifically shoot a video to showcase a product, the platform will obviously pick creators who have followership above a certain threshold.

On whether Moj could also partner with Direct to Consumer (D2C) brands in the future for its live shopping feature, Charan said it is a possibility they are considering but there were challenges. “Often, with D2C brands, their logistics experience is broken. But when you partner with a large e-commerce player, logistics is their forte, return COD and all of those things are sorted. COD for example is a very important aspect in India in urban as well, not just in semi-urban. Returns on COD become a larger challenge because logistics is a larger challenge,” he said, adding that it becomes difficult to control that experience with D2C brands.

“As a user, if you are placing orders with five different orders and three out of those five orders get delayed, it is none of Moj’s fault, but the user will blame us. Therefore we need a partner whose logistics capabilities you can really trust,” he stressed.